Since I mentioned Jam' Iteiyim in my previous posting, here are some photos.

This is inside. There are four columns and a niche facing south. At the present, diggings have lowered a portion of the floor and it seems the building sits above a five-meter deep cistern so there's no more tinkling around for a while. 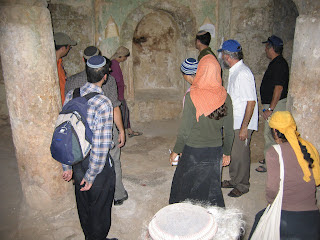 Here is Rachel Ehrlich, in charge of Tel Shiloh, explaining how the basillica was uncovered and the Muslim structure was found to be built smack dab in the middle of it. 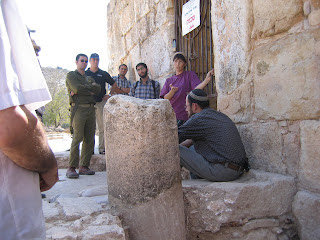 And here is a view of the western wall of Jami' Iteiyim: 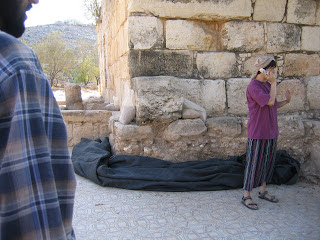 You can see part of the magnificent mosaic floor, too.
Posted by YMedad at 10:55 AM No comments: 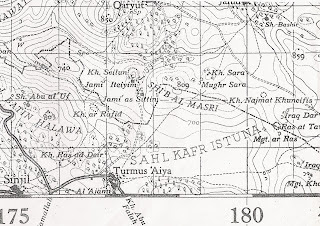 This map is but a small section of a larger one I found many years ago.

It was drawn and published by the British Mandatory regime in 1941 and republished by Israel in 1952.

Shiloh doesn't actually appear. The Arabs, following the Greek, referred to the site as "Kh. Seilun" which, more fully is Khirbet Seilun, the destroyed place of Seilun.

You can see Jami' Iteiyim. That's the free-standing Muslim structure that was built over, we now know, a 4th century Byzantine basillica. Jami' as Sittin is a destroyed synagogue, we presume, over which the Persians built a fortified structure which the Muslims took over circa 638 and it commemorates, the story goes, a heroic battle of 60 soldiers.

The hill I live on is referred to as Shi'bal al Masri (the Egyptian) and is 809 meters high.

To the north of Shiloh is Qaryut and to the south is Turmos Aya.

The valley to the south of Shiloh here is termed Sahal Kafr Istuna, Istuna being now a ruin at the south-east corner of the valley where in 1792 (if I recall), two Jews were killed. There's an ancient mosque there.

Sinjil is seen in the lower left-hand corner. Sinjil is not an Arabic name but a corruption of a Crusader prince named Raymond de St. Giles who built his castle there in 1099. The Arabs later built their mosque on the castle.
Here is my collection of pictures of the recent excavations at Tel Shiloh
Posted by YMedad at 10:21 AM No comments: 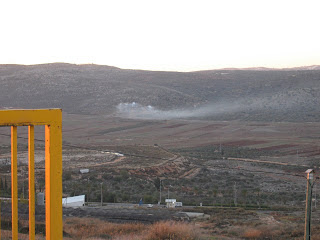 The Arab villages of Turmos-Aya and Hirbet Abu-Fallah have their garbage dump on the south of Shiloh Valley across from us. And they burn their garbage which pollutes our - and their - air.
Posted by YMedad at 10:56 AM No comments: 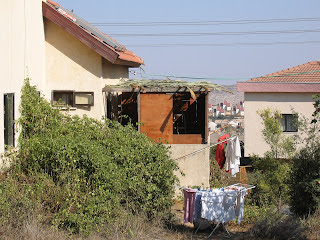 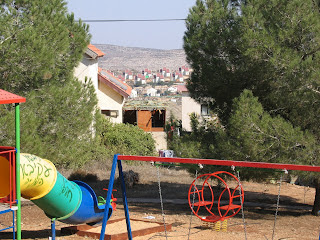 From the kid's park in the back of our home in Shiloh last October.
Posted by YMedad at 7:15 AM No comments: